PREDICT maintains a simple structure as outlined below. The executive represents and communicates with the members and study committees, assisted by the Network Coordinator. Other groups such as external bodies and research parties (such as Centres of Research Excellence) that PREDICT is associated with are added from time to time as appropriate. The stable and base organisational structure is depicted below. 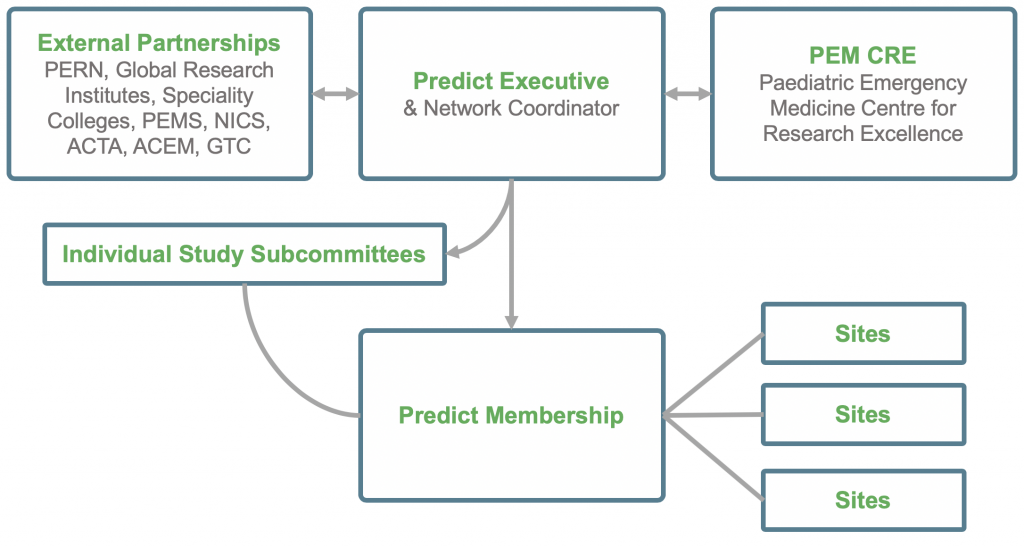 PREDICT is a collaborative network of investigators who share their intellectual property and resources for the common goal of undertaking research in paediatric emergency medicine.
In order to promote the free flow of ideas among PREDICT members, there must be an expectation of ethical behaviour among participants. Collaborative research can only flourish in an atmosphere of openness and trust.

When a protocol is introduced to PREDICT by an investigator, PREDICT Executive Committee members should declare any real or potential conflicts of interest and absent themselves from further discussions of the protocol. Such conflicts include, but are not limited to, developing or implementing, or intending to develop or implement, a similar protocol with the same or other funding agency outside of the PREDICT framework.

Once a PREDICT investigator has agreed to participate in a particular study, the investigator should not undertake any conflicting study that could interfere with their capacity to perform the PREDICT study.

In the event that a PREDICT study does not get implemented, a participating investigator should not undertake a similar study outside of PREDICT without prior discussion with the PREDICT Executive Committee to determine whether the study impinges on the intellectual property of the PREDICT study. This applies to studies with the same or other funding agencies.

Prior to commencing a study, rules of interaction should be established between investigators. These “rules” should govern the performance of supplementary studies, additional use of clinical material derived from the study, and use of the data (presentation, publication).

Research proposal review materials and meeting discussions are privileged communications prepared only for use by the Study steering committee and the PREDICT Executive.

Ethical behaviour in the interactions with Industry Partners

When an investigator-generated protocol is submitted to industry for consideration, it remains the intellectual property of PREDICT and confidentiality should be maintained. The protocol should not be modified or used by industry without the written permission of the PREDICT Executive Committee.

PREDICT expects that industry partners who choose not to fund a PREDICT study will not undertake the same or similar studies with a PREDICT member without the written approval of the PREDICT Executive Committee.

Breaches of Ethics by PREDICT Members or by Industry Representatives

Allegations of breaches of ethical behaviour by PREDICT members will be brought to the attention of the PREDICT Executive Committee who will serve as the review committee of PREDICT. This process will be strictly confidential.

Sanctions available for breaches of ethical behaviour by a PREDICT member will include a written warning, suspension, or expulsion. Notice of the decision will also be sent to the appropriate individual responsible for the member’s academic performance.

Sanctions available for breaches of ethical behaviour by industry will include, but not to be limited to, a written warning, and suspension of interactions (research and other) by PREDICT members with the offending party.